Results showed that the lake was unsuitable for fish and other aquatic organisms; and posed a health risk to residents due to the intense noxious fumes being emitted from the lake. The main problems and the underlying causes identified were:

Hydrogen sulfide (the source of the “rotten egg” odor) permeated the lake and surrounding area due to:

Major fish kills that were likely due to rapid mixing of stratified layers by an existing aeration system that was undersized and installed only in the shallower areas. This undersized system was only strong enough to churn up water from the bottom of the lake without properly mixing and adding oxygen to the entire water column. This rapid mixing of bottom layer waters into the upper water levels depleted all the oxygen in the surface water and brought up high levels of hydrogen sulfide, methane and ammonia from the bottom waters up to the surface causing the death of fish, crabs, shrimp, snails and some birds in the lake.

The breakdown of large amounts of organic matter in the lower water column over time caused the buildup of high concentrations of nutrients, primarily phosphorus and nitrogen. These high nutrient levels fed algal growth in the lake, which made the water look like “pea soup”.

The lake management company had been told that the lake was only 18’ at it deepest point. To confirm this,  bathymetric mapping was conducted  to determine accurate depths throughout the lake, the total water volume and the location of vegetation in the lake. Contrary to what everyone thought, mapping showed areas within the lake that were actually over 50’ deep. This information showed why the existing aeration was not effective and allowed us to determine exactly how much aeration was needed to circulate the entire water body each day; and to identify the best locations in the lake for placement of the aeration. 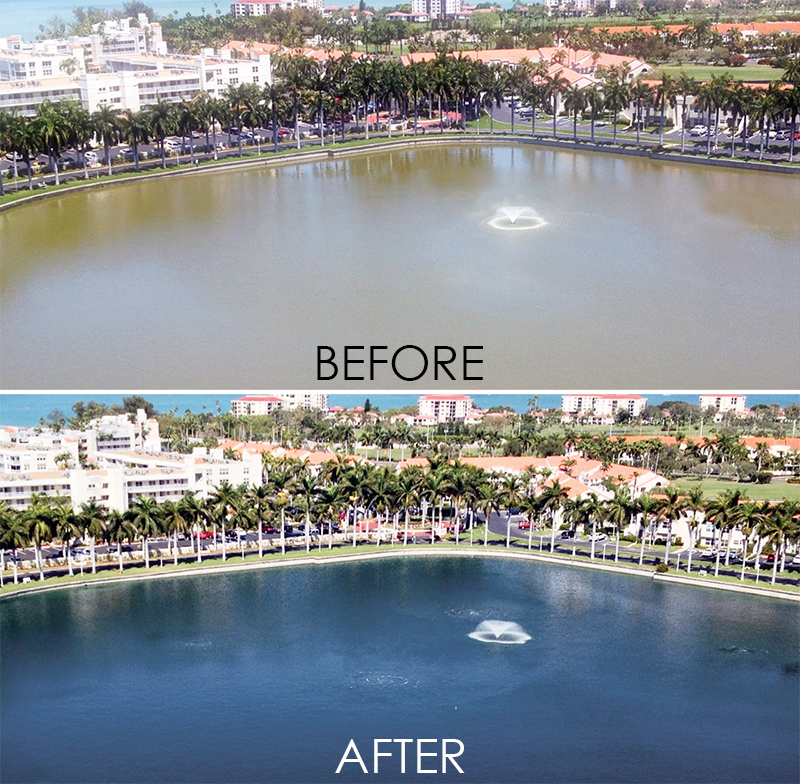 The lake did not support fish and other aquatic organisms, and it posed a health risk to residents. To correct this, a two-pronged approach brought the lake back to a healthy state quickly.

Alum application
Two treatments of Alum at a rate of 60ppm were applied to quickly improve water clarity and reduce water phosphorus levels.

The lake restoration was complete: Oxygen at bottom of the lake went from 0 mg/L to 8 mg/L