Stop Pond and Lake Odors at the Source 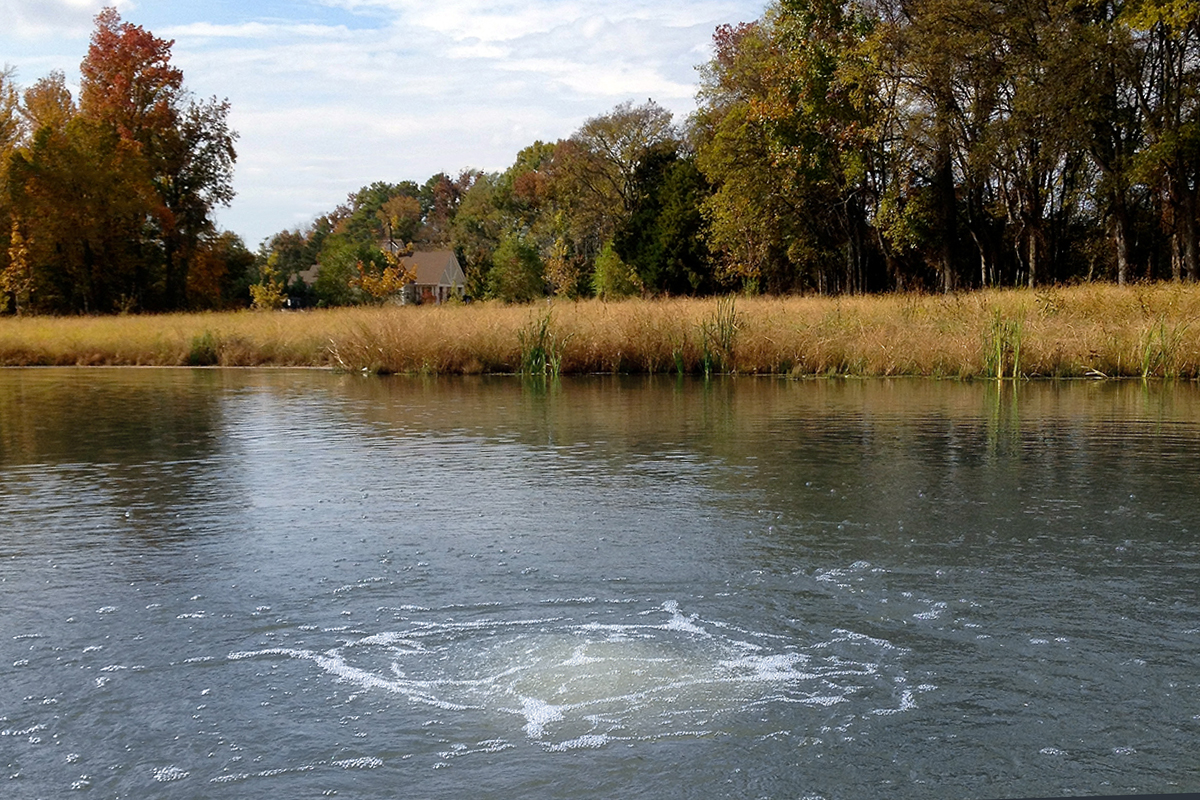 Have you noticed pond or lake odors that smell like rotten eggs? When there is plenty of oxygen in your pond either naturally or from a properly sized aeration system, anaerobic bacteria will step in and breakdown the organic material. But, as they do it, they will give off hydrogen sulfide, the cause of the smell.

You’ll breathe easier when your lake can breathe too

Temperature, water depth and water circulation all affect the oxygen levels in a pond. In general, wind blowing over the surface of the pond will circulate and mix the water in shallow ponds. This circulates oxygen throughout the whole pond. Also, oxygen producing organisms (e.g. plants or algae) in the water can supply the pond with significant amounts of oxygen. Oxygen throughout the whole pond means aerobic bacteria can effectively breakdown organic matter so there are no pond or lake odors.

Deeper ponds are much different. If a pond is deep enough, it can have distinct layers of water. Temperature changes drive the division of water layers called stratification.

In a summer stratified pond, there are at least two distinct water layers

The top water layer has warmer water, more light, and less organic matter than the bottom layer. Although the water in the top layer is warm and holds less oxygen, the smaller amounts of organic matter mean less oxygen is being used up by bacteria working to breakdown this material. In addition, the oxygen levels in this water layer remain high because they are constantly replenished by 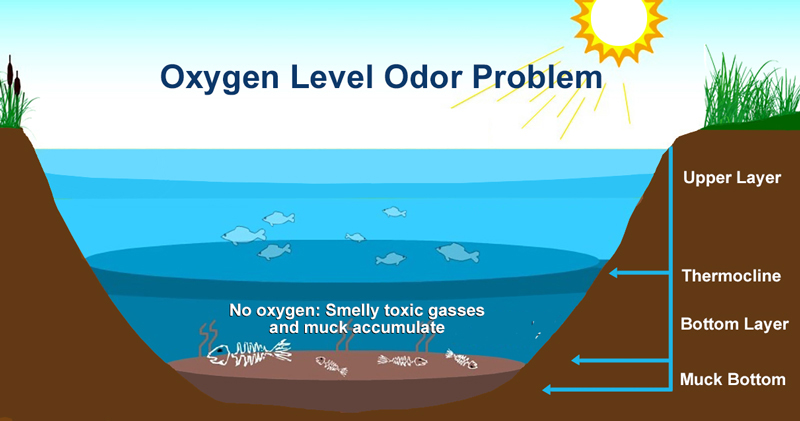 The bottom layer of water is cooler and darker than the surface and sits above the sediment, which is where most of the organic matter lies. Oxygen-needing bacteria in the bottom layer work to breakdown organic matter. They use up the available oxygen quickly and no more oxygen can be added to this layer because:

This is why, even though the bottom water is cooler than the top, it holds less oxygen. Once most of the oxygen becomes depleted, the non-oxygen-needing bacteria take over. As they breakdown organic material, they release hydrogen sulfide. Over time, hydrogen sulfide builds up in the lower water layer and it is trapped as long as the pond remains stagnant.

Pond and lake odors take over in stagnant and stratified water

In stratified ponds, that layer of stinky water stays locked up at the bottom, becoming more saturated with hydrogen sulfide. As the warm summer gives way to cooler fall temperatures, the surface water cools, its density increases, and it starts to sink to the bottom of the pond. This mixing cycle, referred to as turnover, forces the water at the bottom of the pond up.

The mixing of the surface and lower waters causes the release of the once trapped hydrogen sulfide and results in a mass emission of very foul gas and an unpleasant October surprise. In addition to the foul smell, this mixing can also cause fish kills, algae blooms and other problems.

How you can avoid the problem – properly sized aeration !

The best way to avoid the problems associated with seasonal turnover is to prevent your pond from stratifying in the first place by encouraging consistent water mixing all year round. While the water of shallow ponds can be mixed just by wind action, deeper ponds may need some help to get the job done. Many people use artificial methods to help with water circulation. The most common of which is aeration.

What exactly is Aeration and how does it control pond and lake odors?

Aeration refers to the pumping of pressurized air into a pond at strategic points, which forces the water in the pond to circulate. Constant circulation prevents stratification and eliminates the buildup of hydrogen sulfide in the hypolimnion. A properly sized aeration system also consistently forces oxygen-rich surface water to circulate throughout the pond, which results in an even distribution of oxygen throughout the water column. This oxygen rich environment favors the growth of aerobic bacteria and makes it possible for them to consistently breakdown organic matter without the risk of running out of oxygen. As long as circulation continues, oxygen will remain available, anaerobic bacteria will remain at bay and there will be no rotten egg odor.

Enjoy Being Around Your Pond or Lake Again