Seasonal Changes in Ponds and Lakes

Seasonal changes to waterbodies are generally defined by precipitation and temperature patterns during different times of the year. The way we experience seasons varies greatly depending on our location. However, lakes and ponds commonly respond in similar ways to the same ecological inputs. Tropical areas experience rainfall patterns similar to the seasonal changes that impact lakes and ponds further north. 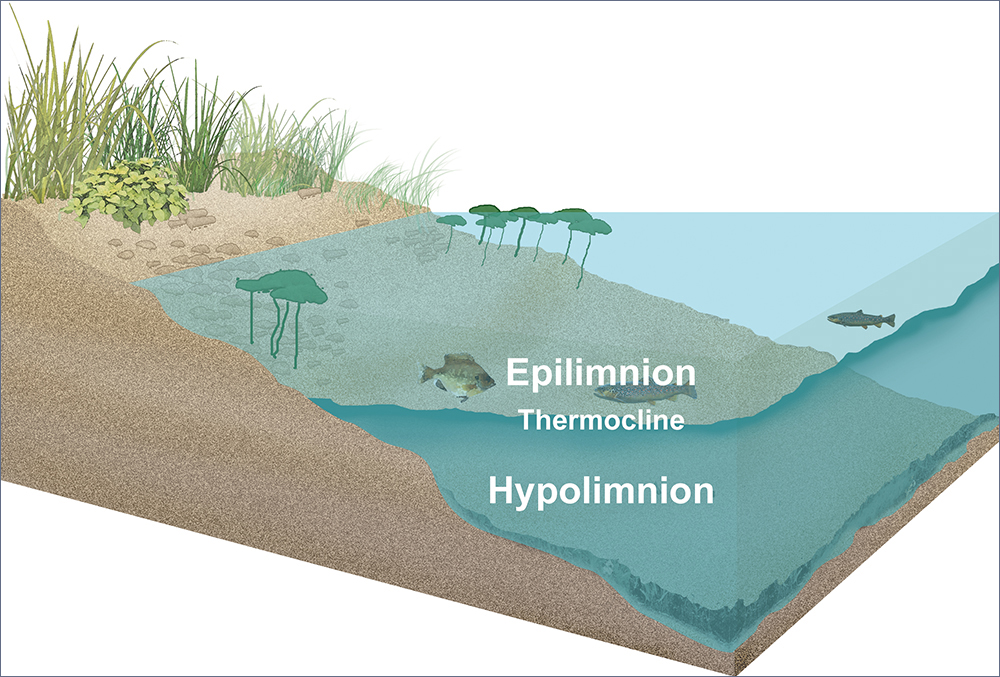 As the weather gets hotter, the density difference between warm surface waters and cold bottom waters increases to a point where two separate layers are formed. This phenomenon, called summer stratification, prevents whole lake mixing. Nutrients on bottom of the pond stay there. Also, bacteria consume nutrients and dead organisms, so oxygen depletes faster than it is replaced. Since this oxygen cannot be replaced, this layer loses all oxygen and becomes anoxic. Anaerobic bacteria digest organic material much slower, resulting in the formation of hydrogen sulfide gas, which has a ‘rotten egg’ smell. This gas generally stays in bottom layer until autumn cooling allows the lake to mix again.

Warm summer water actually holds less oxygen. Large algae blooms that overcome the oxygen supply when decomposing after dying off is unsightly and can cause summer fish kills. Aerating lakes combats summer problems by preventing stratification and increasing the overall oxygen supply in the lake. 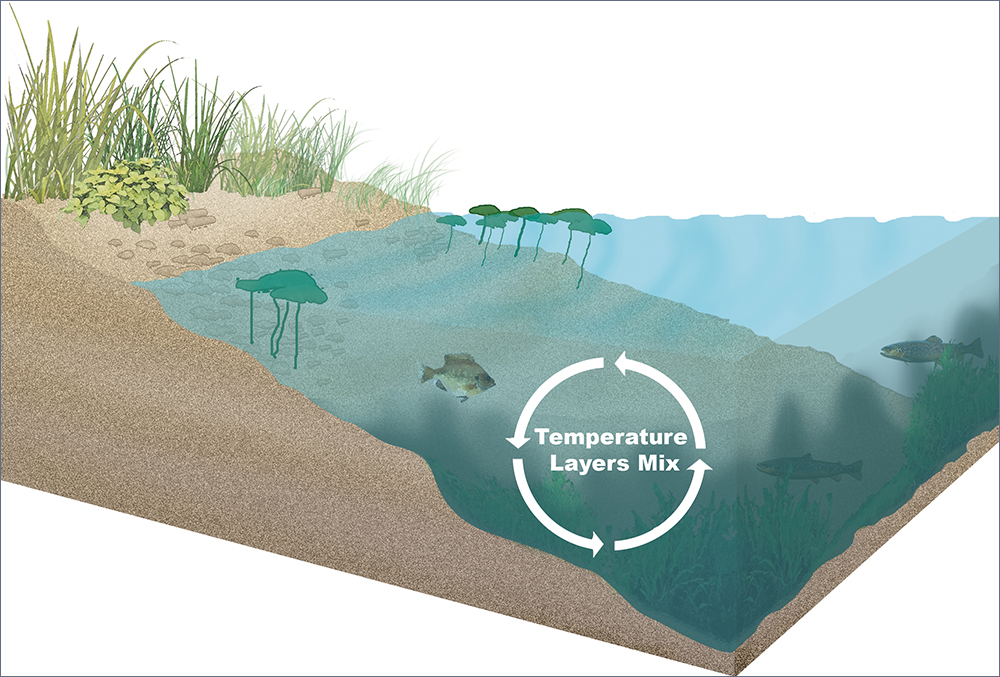 Cooler autumn temperatures reduce the energy required to mix lakes, allowing complete lake turnover to occur. This mixes nutrients and gasses (like smelly hydrogen sulfide) from the bottom layers. Mixing of the lake increases oxygen by exposing a greater volume of water to the atmosphere. If a substantial portion of the lake volume lost oxygen in the summer, a rapid fall turnover occurs. This can cause fish kills by diluting the oxygen that was available in the surface layer before mixing. Aerating during the summer can prevent this type of fish kill. As autumn temperatures continue to drop, ice formation at the surface gradually reduces mixing.

Seasonal Changes in Winter Cause Stagnation

Cold temperatures slow the metabolisms of all living creatures, reducing oxygen in winter lakes and ponds. In lakes covered by ice, water temperatures are about 4˚C (39˚F) top to bottom. The ice on top is between 0˚C (32˚F) and 4˚C. Ice is less dense than water, so it floats on the top of the lake, allowing fish and other life to remain alive below. Ice can become so thick that little light penetrates to the water below. Photosynthesis, already slowed by the cold, ceases to take place in the dark. The ice also separates the lake water from the atmosphere so that no direct diffusion of oxygen can occur.

Although fish and other organisms need very little oxygen when water temperatures are so cold, oxygen may entirely deplete, resulting in a winter fish kill. Prevent fish kills by keeping a hole open in the ice.  Add an aeration system to allow the water to continue to mix and prevent ice around docks and other structures in winter. 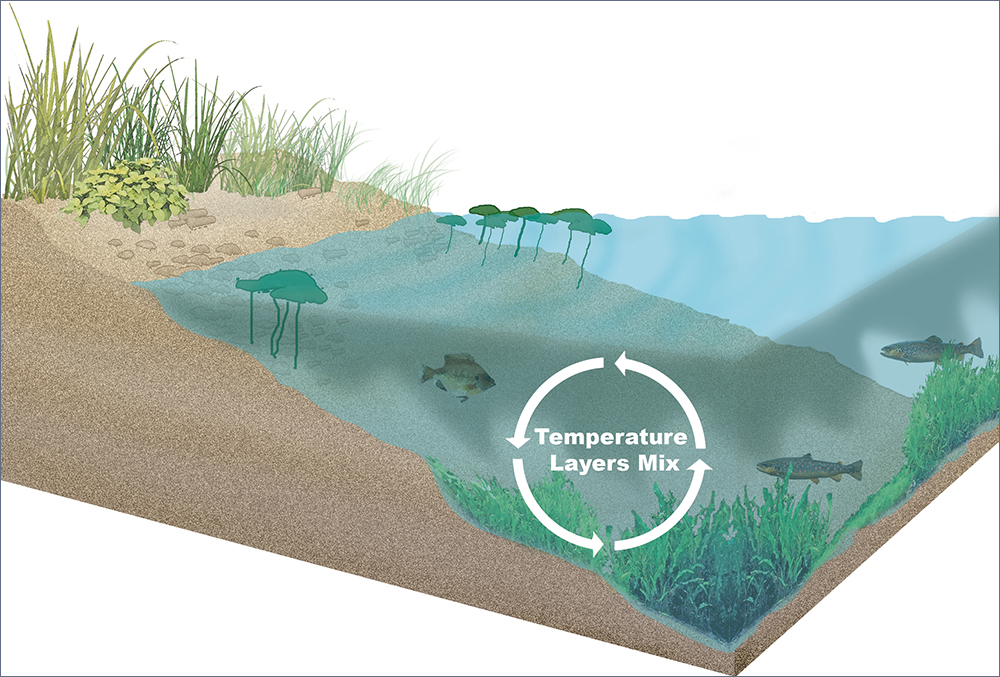 As temperatures increase and melt winter ice, lakes in spring experience warming at the surface that leads to stratification. Whole lake mixing usually occurs in spring just after ice melts. As the temperatures continue to rise the difference in temperature between the surface and the bottom soon prevents mixing of the two layers. Frequent spring storms bring not only water to the lake, but an influx of nutrients from the landscape. Excessive nutrients cause spring algae and zooplankton blooms. This cycle creates even more nutrients in the lake to be cycled up through the food chain.

Waterbodies Need Oxygen in Every Season